The Walk Of Grace Under The Rainbow

The Walk Of Grace Under The Rainbow 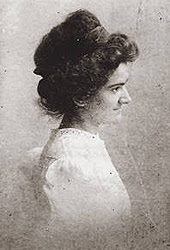 '' I do know that I am not a well-known or an important figure'' - she wrote half a century ago, almost like apologising to her audience, Marija Maga Magazinovic, in her autobiography, which will be published not before than in 2000. Delayed, as well as the recognition that this exceptional woman undoubtedly deserves for her long and rich work-life, written by her own hand, a book ''My Life'', which is an authentic, extraordinary fresh and easy read. This is a breathtaking story about an epoch in the history of Serbia and Europe, but also about an exceptional woman who, in her own eyes, wasn't very much of a beauty, but when dancing, she would know how to transform into the most stunning creature.
Marija Magazinovic, a daughter of hardworking and wise Stanka and temperamental local tailor Rista, who loved epic poems and romance novels, was a woman of the most graceful walk and brilliant mind. A dancer with a perfect sense of movement, a graduated philosopher and a writer of fine sensibility, and above all disciplined ''soldier'' with the deepest believe in the importance of social equity and equality among genders. Thanks to these qualities, Maga Magazinovic is without any intention to take a place in the history of the Serbs, enrolled herself and her achievements in the foundations of not only Serbian, but also the world history of feminism, socialism, education, journalism, psychiatry and dance.

She was the first woman to graduate from the University of Belgrade as a full-time student in 1904, not because she wanted to carry out some kind of feminist revolution, but because she considered it prejudiced that someone attending such lectures and taking exams, which was then the case with part-time female-students, had no right to receive a degree and recognition. After graduating in the class of legendary professor Brana Petronijević, she was employed in 1905 as the first woman librarian in the National Library. Although, male librarians frowned on the appearance of the "skirt" among bookshelves, Maga, on the recommendation of the writer Milovan Glisic, who was thrilled with how well-read she was, was welcomed in the building in Kosančić's Venac, hectic neighborhood of Belgrade. 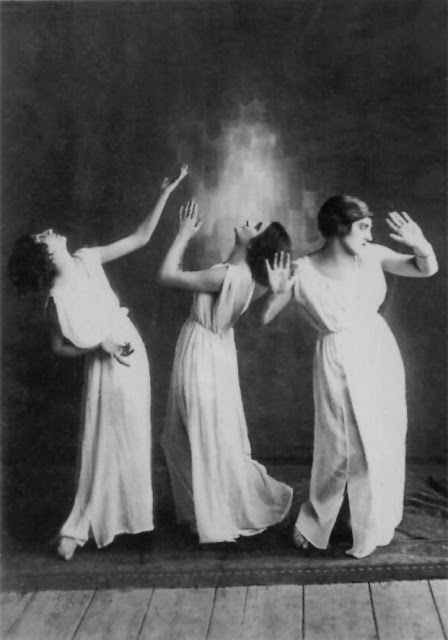 Maga Magazinović was avant-garde in any sense of it.

She often acted at the Abrasevic Worker's Society theatre, went to students' dance balls and other local dance events of that time, she would make her own costumes, and was madly in love with her school friend, founder of art criticism in Serbia, painter Branko Popovic. Coming from hardworking middle class family, deeply connected and very close to her parents and siblings, she was forced to leave her hometown Užice, Western Serbia, in 1896. and move to Belgrade, Maga rushed to find the job so she can support her parents and her younger brothers and sisters. For that reason, for two gold coins that time, she started working as a journalist and editor for ''Women's Pages'' column, for the oldest daily newspapers in Balkan - Vlada Ribnikar's POLITIKA daily. As the first woman journalist in Serbian history, she was writing impressive articles and discussions on the importance of women's education, social and political emancipation. Her ''Woman's Pages'' were the place for the latest news from the world of science, culture and politics, not some cheesy articles about latest fashion trends or make up. Such a concept of Maga's writing, has provoked Vlada Ribnikar to tease Maga that she was one of those feminists that will marry first handsome Serbian colonel that approaches her. Maga never got angry with her boss Vlada, whose ''predictions'' turned out to be inaccurate, since Magazinovic never married a colonel, not even a Serb, and she remained to work for ''POLITIKA'' daily, until she got a job as a ''class teacher'' in Female Secondary School. This is when Maga's dream to become a teacher came true and to put all of herself into what she considered ''the most important of all her duties'' - the upbringing and teaching of the young generation of Serbian women.

If there were no "revolutionary" intentions in Magina's decisions to join the National Library and "POLITIKA" daily, the enrollment at the Faculty of Law and the fight for the right to undertake a professor's test are rebellions against gender discrimination for sure.  At the beginning of the 20th century, the Faculty of Law was the last male bastion at the Belgrade University, and the ultimate Maga’s opponent to enroll in studies was well-known Slobodan Jovanović.
Maga managed to enroll, just as she persistently filed a petition to the Ministry of Education at that time, to take and pass the final exam.

Blue Socks & Running Under The Rainbow

Everything in Marija Magazinović's life is the fruition of true faith and great self-restraint. From the moment when she was six years old, in floods of tears, with her tiny hands, she knitted the blue socks for her father Rista, who promised that she would be enrolled in elementary school earlier then she should, only if she finishes those famous blue socks within the day, the entire Maga's life was one fateful knitting through years and decades of a unique pattern in a much wider sociohistorical context. From her childhood, Maga was aware of every kind of discrimination, and her own feminism began on the day when she was not allowed to play a main warrior, because she was a girl, although she was the best. 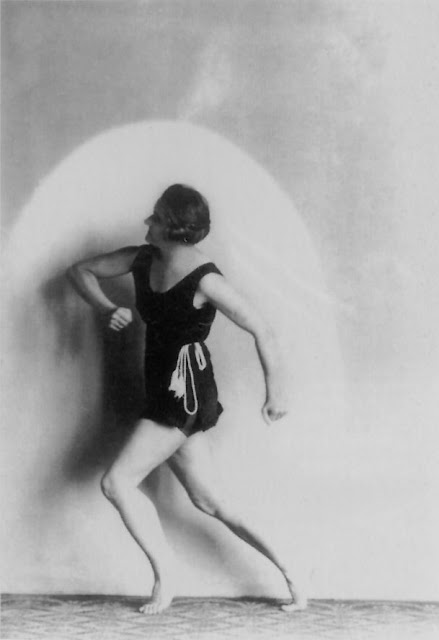 The pioneer of contemporary dance.

"Since then, I have been steadily running under the rainbow trying to become a boy and a warrior," this was Maga's oldest recollection of petty social injustice. 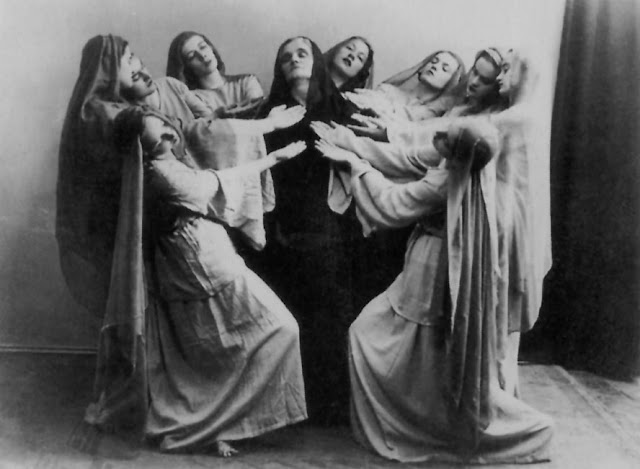 Maga tirelessly absorbs all the knowledge and skills offered by this great ecstatic world of overseas higher schools and European art, often and through the all day, on one cup of coffee and piece of bread, while renting tiny room in one of the poor quarters in Berlin’s student district. She is going with easy through the audition at the famous Isidora and Elizabeth Duncan Dance School, as well as the acting class in Max Reinhartt's avant-garde theater, where she will also meet the love of her life - Gerhard Gesemann, German slavist , folklorist ,literary scholar and university professor. One year later, her talent has been highly recognised, the leading European experts in movement, plastics and rhythmic gymnastics - Mary Vigman, Emile Jaques-Dalcroze and great Rudolf von Laban – were among other Maga’s teachers. – Through the whole day, from an early morning, she would attend dance classes, and then in the evening she would be at the theater, watching over and over again plays in which the main role is played by a well-known Austrian actor, Alexander Moisiu. She mends her own torn shoes, putting cartons in them, so she can save the last penny for tickets for plays in the theater or the concert hall. Her true enthusiasm with art is stronger than poverty, cold and hunger. Embarrassed by this great creative fire, tiny and fragile Maga, now in her thirties, turned over the head of six years younger Gesemann, who, along with her and famous Serbian play "Kostana" learned Serbian language. This is how, through this extraordinary woman, Gerhard Gesemann fall in love with her homeland too. He was amazed with the country so much that he even changed his religion to Orthodoxy, he started working at the First Male High School in Belgrade on the eve of the First World War, and finally, in 1915, without a doubt, he went with the Serbian army and the people to the path of death over the ice of the Albanian-armed mountains.

Battle for Her Own Mind

Upon her returning from Germany, Maga and her friend Zora Prica, in 1910, opened a School of Declamation, Aesthetic Gymnastics and Foreign Languages. This, for that time, avant-garde school, attended by many young Belgrade girls, has never received full social support, nor the support from mighty patrons, even though some of the most famous ballet dancers came out of it, including multi-talented Lujo Davico. However, Maga Magazinović wasn't discouraged by that. She is deeply convinced that the modern ballet in Serbia will find its place one day, and that physical education is of essential importance for spiritual growth. Maga continued with her school until 1935. The dancing helped her overcome the biggest tragedies of her life, the premature death of Harald-Rajko, her one-year-old son in 1916 and a divorce from Gesemann the same year after discovering that her husband had a mistress for some time. Maga's life with Gesemann, their deep, but also tragic love that ends with the birth of their second child - the daughter Rajna in 1917, is a true novel waiting for it's own writer. In a deep depression from those difficult years, Maga is going through the most difficult and the heaviest battle of her life - the battle for her own mental health. With her free spirit and great courage, she is the first woman in Serbia to write pages of her deep depression on the brink of suicide, and the fact that the Swiss psychiatrists were successfully treating her for three months with the most up-to-date autosuggestion method, for that time. Fighting the battle for her mental health, Maga simultaneously battles the life of her own daughter, who suffers from "Spanish fever" during the epidemic of 1917-1918, which took several hundred thousand lives across the globe. At the end of the war, with a small child on her hands, alone, mature and incomparably stronger, she returns to integrate the entire self into the pedagogical work related to the dancing, in her homeland. 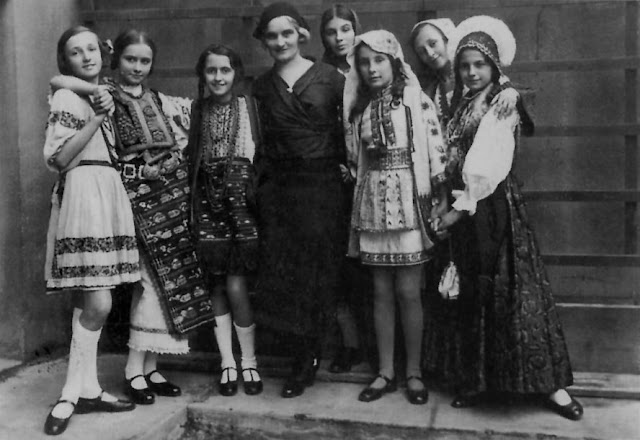 With her students dressed in traditional Serbian costumes.


"From all the women who dedicated their lives to a new artistic way of dancing, the most talented were Mary Vigman and Maga Magazinović," wrote on May 17th, 1925, Rudolf von Laban, the famous European choreographer, professor and theoretician of dance. Unfortunately, as many times before, her success


and talent were not recognised in, culturally undeveloped Serbian environment whose mentality was described in the well-known magazine "NOVOSTI" in watching one of Maga's performances: "Just because she comes from here, we February 1927, by Milica Jakovljevic Miriam who wrote the following after rhythmic group performed the same, we would say that it is perfect, because we don't recognise and celebrate her talent and achievements. If a foreign come from abroad. " are always inclined to believe that modern dance and ballet are better if they come from abroad. "


Marija Maga Magazinović died on February 8th, 1968, in Belgrade. Her small legacy, which consists of photographs, documents and personal items, is kept in the City Museum of Belgrade. In Serbia, with the exception of one street in Maga's native town Užice, there is nowhere to be any feature that would resemble this exceptional woman and her contribution to Serbian culture and history. Maga Magazinović, to the shame of her own nation, gracefully walked away, passing under the rainbow many many times over and over again. 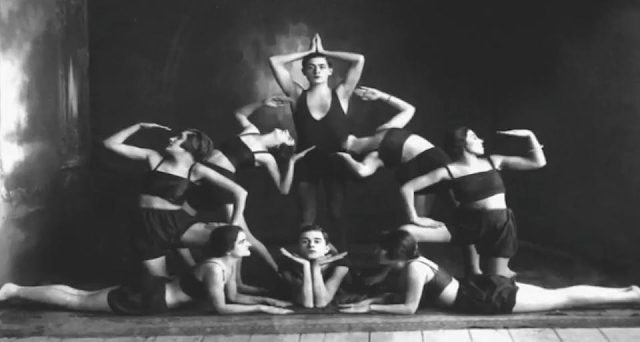 Maga Magazinović establishing modern ballet in Serbia 10 years before the classical one came along.

It is time to put this marvelous human under the spotlight, show the respect she deserves and have her spirit live and inspire many new generation and talents to come.


Edited and translated from the Serbian by

Email ThisBlogThis!Share to TwitterShare to FacebookShare to Pinterest
Labels: The Walk Of Grace Under The Rainbow